BOXERS, COACHES AND OFFICIALS OF THE ARMY BOXING ASSOCIATION ARE REMINDED THAT DUE TO COVID 19 RESTRICTIONS SET BY HM GOV AND ARMY HQ (NOT ASCB OR ARMY BOXING) NO BOXING ACTIVITY IS PERMITTED IN ANY ARMY INDOOR FACILITY AT PRESENT.

BOXERS ACCESSING CIVILIAN CLUBS MUST ATTEND ENGLAND BOXING AFFILIATED BOXING CLUBS AND MUST DO SO WITH THE PERMISSION OF THEIR CHAIN OF COMMAND. SHOULD PERMISSION BE GRANTED THEY ARE CONSIDERED OFF DUTY.

The CSBA, together with its boxers and officials, is highly regarded within ABAE and over recent years has produced ABAE Senior and Novice Champions, International boxers and a number of England, European and World Major Panel Officials. 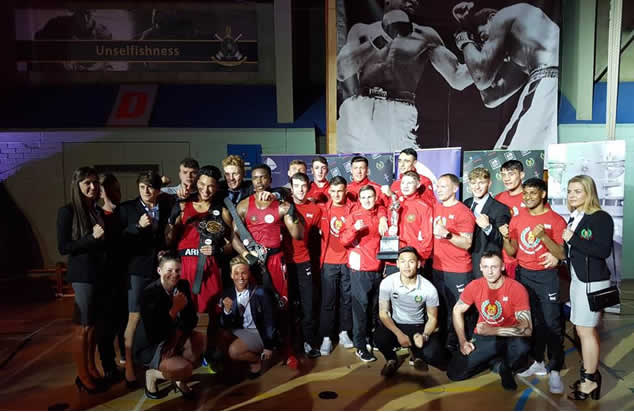 The Championships for Senior Class Boxers (Open Class) are usually held in March, at HMS Nelson, Portsmouth, Army Boxing Centre, Aldershot or RAF Cranwell and are a qualifying round of the Amatuer Boxing Association England (ABAE) National Senior Championships. One boxer each from Royal Navy, Army and Royal Air Force are selected by their respective Team Coaches to enter the championships in weight category. Any semi finals (three entries in one weight) are boxed the day prior to the Championships Finals.

In addition to Individual Titles, the Inter Services Team Championships are decided at the event. The winner of the individual title gains one point towards the team competition. One point is awarded for a walkover. The winning team is the team with the most points. In the event of a tie on points the current Service Title holders will retain the title. In the event of this still not producing a winner the Service with the greater number of finalists will be declared the Team Champions.

The Imperial Services Boxing Association Championships were instituted in 1919, in which year the Australian, New Zealand, Canadian and South African Expeditionary Forces also competed. The championships took the form of individual championships with separate categories for Officers and Other Ranks.

In the years 1923, 1924 and 1925 the championships took the form of Inter Service Team Championships between the Royal Navy, Royal Marines, Army and Royal Air Force.

The Army Boxing Team is the current holder of the Noble Statuette, having won the Title for 26 years in succession.