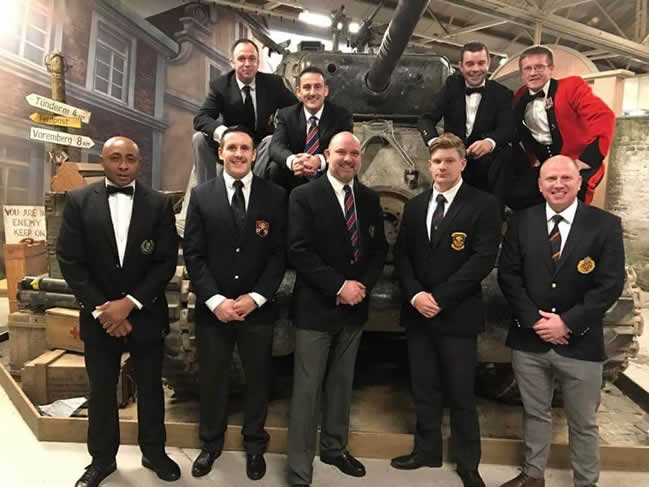 1. Tournament officials are qualified as per the National Governing Body’s (England Boxing) and AIBA rules (Reference A and C). The following grades of officials are applicable:

2. Dress. All Officials are to dress in accordance with these regulations, under normal circumstances this will be Army/Corps/Regt mufti:

a. Referees are to be dressed in black trousers, white shirt (with collar), black bow tie and black shoes or boots without raised heels whilst officiating in the ring. Service/Corps/Regt blazer may be worn whilst judging or sitting out.

b. Other officials should be dressed in Service/Corps/Regt Mufti. Female Officials (except referees), are to be similarly dressed, but may where a suitable skirt and/or blouse, in accordance with their Service/Regt/Corps Dress Instructions. Mufti is; Black blazer with Service Association Boxing Badge embroidered on the left chest pocket, grey trousers, white shirt, black shoes and tie. Female officials are not required to wear a tie.

c. International officials are permitted to wear their international qualification badges on blazers/shirts.

A high standard of turnout is expected.

3. All Officials must be:

a. In possession of an Official’s book bearing a likeness photograph and the current season’s registration stamp. The book must be carried at all times when on duty and presented to the Supervisor upon request. For insurance whilst on duty, he must also be registered on the Boxing England National Database for the current season.

b. Qualified by examination set by:

d. On the appropriate Association’s list of qualified Officials.

f. Must attend continuous development training a minimum of every 3 years, which is to be recorded in the official’s boxing registration book.

h. Re-assessed by written, oral, and practical examination, if inactive for 2 or more years, before being allowed to resume officials’ duties.

4. An Elite boxer can be trained and act as an official during his boxing career. After qualification/training he/she can be appointed to officiate at tournaments, so long as they are not boxing in the same tournament at which they are officiating.

5. An official must have served for at least two years as a judge and or Referee/Judge before being allowed to take the Supervisor examination.

6. Each Command shall compile a panel of Grade A / Grade B / Grade C registered Supervisor’s, Referees, Judges, Timekeepers, and AIBA Computer Scoring Operators, who must be qualified by examination, when required by AIBA & England Boxing rules. Grade C officials, should not be used for Championship events.

7. A Supervisor, Referees, Judges, MOA, Recorder and Timekeeper, shall be appointed by the Regional Associations/Divisions for all tournaments. For National Semi-Finals, National Finals of all Championships and Home Internationals, the England Boxing R&J Committee will appoint Grade A and/or AIBA level Supervisor’s, Referees, Judges, Timekeepers, AIBA Computer Scoring Operators and MC/Announcers.

8. Any Supervisor, Referee, Judge, or Timekeeper who has been active in that capacity at Grade C may be nominated for upgrading to Grade B. Any Grade B official, who has been active in that capacity, may be nominated for up-grading to Grade A. Details of upgrading procedures and Major Panel selection is outlined below. AIBA upgrading is through Boxing England selection in accordance with AIBA rules.

9. All newly qualified judges must sit in at a tournament and judge a minimum of 10 bouts alongside the appointed judges. Their results will be assessed by a qualified Grade A referee or Grade A Judge from the Army Major Panel and they will be told when they are competent enough to be appointed to tournaments.

10. Newly qualified referees will be assessed at a tournament by a qualified Grade A referee from the Army Major Panel. They will be told when they are competent enough to be appointed to tournaments.

11. Individuals wishing to qualify as a Grade C official should apply in accordance with the instructions below.

13. All Army personnel who wish to qualify as a boxing official i.e. Judge & Timekeeper (JTK) are to apply to the ASPT via the normal procedure. On successful completion of the appropriate course, examination, and practical assessment, they will be qualified as a Grade C official. The results are to be forwarded to the Army BA Ops Officer and the individuals’ Regional Boxing Secretary.

14. Criteria for upgrading of boxing officials are set by the UKAFBA Major Panel and are:

a. Upgrade from Grade C JTK to Grade C Referee :

(1) Minimum of 2 consecutive seasons as an active JTK or exceptional recommendation from Service Officials Secretary or Regional Chairman.

(2) Attended and officiated at a minimum of 5 different events in each season, with details of number of bouts recorded.

(1) Minimum of 2 consecutive seasons as an active Grade C Referee or exceptional recommendation from Service Officials Secretary or Regional Chairman.

(2) Refereed and logged a minimum of 12 contests in each season.

(1) Minimum of 2 seasons as an active Grade B Referee or exceptional recommendation from Service Officials Secretary or Regional Chairman.

(2) Refereed and logged a minimum of 15 contests in each season.

(3) Upgrading to Grade A can only be conducted through the England Boxing via the UKAFBA Officials Secretary.

15. The minimum qualifications needed to run JTK courses and upgrading to Referee Grade B are:

b. Referee upgrading – Minimum of two Grade A R&Js.

16. Candidates who wish to be selected for upgrading must have a recommendation from their Command Boxing Representative in consultation with at least one Major Panel Grade A R&J.

18. Upgrading assessment will be conducted (usually) at the Army Individuals Championships. Permission to conduct upgrading away from these championships must be gained from the UKAFBA Secretary. Candidates will sit a controlled theory examination followed by a practical assessment.

19. Any boxing official who has not officiated for a period of 2 years will be deemed as inactive. To reactivate qualification, individuals must sit a controlled theory examination and shadow for at least 1 competition. This process is controlled by Service Officials Secretary or Regional Secretary who will appoint a minimum of one Major Panel Grade A R&J to carry out the assessment.

21. Due to the nature of tournaments at which both the UKAF and Army Major Panel members officiate (England Boxing civilian shows, UKAFBA / single service championships / Unit organised charity events against civilian boxers, etc.) all potential officials for the Major Panel are required to have a high level of experience. The minimum criteria expected for candidates wishing to be considered for either is:

a. Minimum of 3 seasons as active Judge, Timekeeper, Referee.

b. Logged experience of officiating at least 12 contests in each season.

c. Recommendation from Regional Boxing Secretary / Chairman. The recommendation is to include a brief summary of candidate’s achievements.

22. Applications must be submitted in writing by Single Service Officials Secretaries or Regional Boxing Chairman to the UKAF & Army Officials Chairman at least 21 days prior to Army Individuals Championships. Contact details are available via the Army BA Ops Officer or the Army Boxing web site.

23. Assessment will be conducted at the Army Individuals Championships. Candidate’s England Boxing Registration book will be scrutinised to confirm minimum experience is valid. Candidates will sit a controlled theory examination followed by a practical assessment.

24. An overall assessment of the written and practical examinations will be evaluated and a summary given to each candidate by the Supervisor of the Championships and/or the Officials’ Secretary. Competent candidates will then be selected to the Major Panel.

25. The UKAF & Army BA Officials’ Chairman is to maintain a list of all of Major Panel Officials and all Grade A and AIBA registered Supervisors, Referees, Judges, and Timekeepers who must be qualified by examination by the Army BA/UK AFBA/England Boxing. All Officials must be members of a Club or other affiliated Association (e.g. UK AFBA). Only Officials from this list will be authorised to officiate at preliminary, Association, pre-¼ Finals and ¼ Final rounds of all Championships and representative matches.

27. Army Major Panel members are expected to attend a minimum of 3 Army Major Panel fixtures each season. Failure to do so may result in removal from the Major Panel. Dispensation will be given to members involved on operational deployments.

28. Major Panel membership is reviewed annually at a meeting of the Major Panel. Members who have elected to be removed or those deemed not to be active or non-supportive will be removed.

29. Breaches/failings in officials’ duties/performances will be dealt with via a disciplinary panel arranged under the direction of the Major Panel. The composition of the panel will be Chairman, 2 x Grade A or above Referees. The Secretary of the UKAFBA will collate the information on behalf of the Panel but act as an independent member. The decision will be notified under arrangements issued by the Chairman of the Association concerned Appeals may be made using the military redress of grievance procedures.

30. Only Grade B Major Panel Officials will be nominated by the Officials Chairman to the UKAFBA for upgrading to Grade A. All Grade A officials are England Boxing Panel.

31. Only Officials from the Major Panel Officials’ lists will be authorised to officiate at preliminary, Association, pre-¼ Finals and ¼ Final rounds of all Championships and representative matches. Grade C officials, will not be used for Championship events.